Awoke to a foggy and rainy day, but by the time we arrived at the North Haven Boat Ramp – it was a glorious day with the sun shining, calm seas, and, as it turned out, great visibility.

Highlight of my dives for the day was a Sea Pen – sighted “somewhere nearby”.

The resident Wobbegong is still there – could only see one third of his body – I think he’s stuck there in the wreck, as he’s getting pretty big. Another highlight was a very unusual decorator crab.  Oh, and a fair few anchors appeared to have been left behind by fishermen.  Looked like the site hadn’t been dived for a while, as the plaque was completely covered in growth, but the trusty knife gave it a good clean. 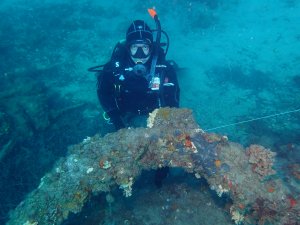 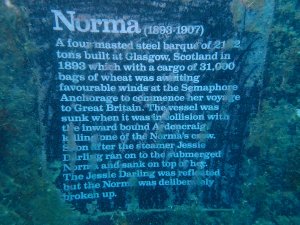 Thank you to my buddies and the boaties for a great day!

This year we spent the March long weekend at Edithburgh, staying at the Kingfisher lodge where we had been many times before.

Saturday morning we arose to windy conditions but after checking out the Edithburgh jetty we made the decision to dive there, knowing the conditions were not great, but even a not so great dive is better than none.  There were many other divers who’d also chosen to dive the jetty, as the conditions didn’t allow many other sites,  so it was a bit of a wait as we all filed down the steps and into the water.  As soon as we got in, we noticed the visibility was poor, but by cruising along slowly and spending our time looking close we found many of the small critters that are abundant under this jetty.

With so many divers under the jetty at one time, expectations were low but we did manage to see 6 Cowrie shells, Hermit Crabs and schools of Chow drifting around the beautiful covered jetty pylons. Near the end of the jetty the visibility improved slightly but the swell was annoying if you were trying to keep still and take video or still pictures. At the end of the jetty there was a folding camping chair sitting upright and looked as it had just got there so I folded it up, put it under my arm and swam back with it. There was plenty of Bullseyes, Moonlighters, Drummer bream, Magpie perch, schools of Zebra fish and a few Snook hiding in the shadows ready to race out at unsuspecting prey. While Hels was taking some photos I was taking some movie footage of the critters that were probably camera shy by now after all the passing divers. 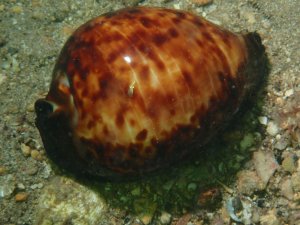 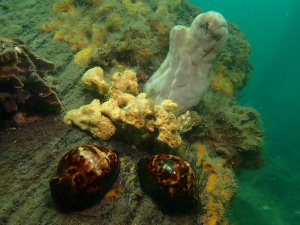 After lunch we went to Wool Bay hoping to see the illusive leafy sea dragon but the tide was very low and the water very dirty so this idea was abandoned. We then went back to Edithburgh but the wind had picked up even more, so a walk to Sultana point was decided upon instead.

Saturday night was at the local hotel for diner where we caught up with Max, Dicko & Ronnie and to share a huge birthday cake as several of us had recent birthdays, or in the case of Hels, was on that very day. After dinner there was many games of 8 ball played and as the night went on for some reason the quality deteriorated.

After a very windy night we arose to strong south east winds which made the jetty very rough, the ocean was covered with whitecaps so that was not looking good. We went to the local markets in the morning and had a coffee at one of the local cafes and generally relaxed until lunchtime. After lunch Hels and myself went for another walk to the jetty and while it was still very windy from the SE and still covered in whitecaps, when we looked over the side of the jetty and down the jetty pylons it was surprisingly clear…….well, sort of –  that is subjective, it seemed clearer that Saturday. We decided that we would go for a dive and if we were wrong and the visibility was no good it is easy to call the dive off.

We set up our gear and were the only divers there, not surprising as the ocean looked terrible. Once we were in the water it was unexpectedly better visibility that yesterday, even though the wind was stronger.  As we slowly swam along the southern side of the jetty I noticed that the jetty pylons looked in good condition, they were all covered with lots of colourful sponges, Ascidians and coral growth. Some pylons were completely covered from bottom to top so I guess that is a healthy sign. In amongst the colourful sponges were bright red starfish and the occasional 11 armed starfish. We moved along taking still photos and video of the fish life including the Red mullet that seem on a never ending quest sifting the sand for food. There seemed to be quite a few jetty beams that were lying on the ocean floor that are now completely covered in large Ascidians and sponges and while it looks beautiful my concern is that when they repair the jetty all this growth will be destroyed.

On both days we saw a few of the common pink and white Nudibranchs slowly moving around and quite a few Scallops that had attached themselves to the jetty pylons and beams while staring at you through their fluorescent blue eyes. There were juvenile Sweep near the end of the jetty and some Cow fish that always seem like they have had way too much coffee. Back down the north side of the jetty and there were more schools of Bullseyse hiding under the fallen beams.  I then filmed 2 Wavy Grubfish, these are the brown and white fish about 100mm long that we always see scurrying about the sand and rocks but also seem curious to see what you are up to. After filming 2 of them I moved on to film a nudibranch and the Grubfish decided to photo bomb my shot by sitting right next to the Nudibranch & biscuit star, not that I’m complaining as it made a rare interaction of marine life. 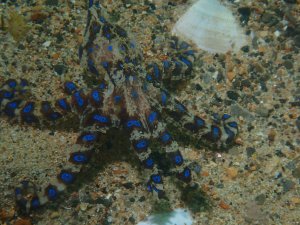 When we came to steps I thought I would do the right thing and get out and up the steps first so I could help Hels up with her camera. By doing this I missed Hels finding a Blue Ring Octopus right under the steps so I hope she got some good photos because I didn’t see it.

By the time we surfaced it was even windier and there was virtually no one on the jetty, even the fishermen had called it quits. Sunday night was being spent at Ronnie’s & Dicko’s for a “P” theme night as it was Pete’s 69 +1 birthday, we were having Pizza, Pana cotta, Pina colada, popcorn & peanuts and then watched Bohemian Rhapsody which I hadn’t seen before.

Monday morning was the usual pack up and head home in very windy conditions, but what was surprising was that by the time we passed Pt Vincent area it was calm and by Ardrossan we witnessed a very flat ocean, so it seems that the wind was contained to the lower part of the peninsula.

A special thank you to Helena for organising the weekend and being my dive buddy and to Ronnie & Pete for having us over for a lovely dinner and to all those who came along on the weekend.